Roller Coaster Physics ---A Revisit of Your Schoolday Nightmare

Roller Coaster Physics ---A Revisit of Your Schoolday Nightmare

Roller coasters are always the star ride for an amusement park. Almost all parks build one or two roller coasters to consolidate their fan bases. A park’s likability thus is in direct proportion with having a coaster or not and what kind.  Yes it is thrilling and fun, with all that monstrous steel structures and insane layouts, really intimidating.  Yet it uses the very basic physics you may have already scratched your head about when you were an 8th grader.

A roller coaster obeys the law of conservation of energy. Its passenger train can travel only as far as the amount of potential energy it gains when launched. 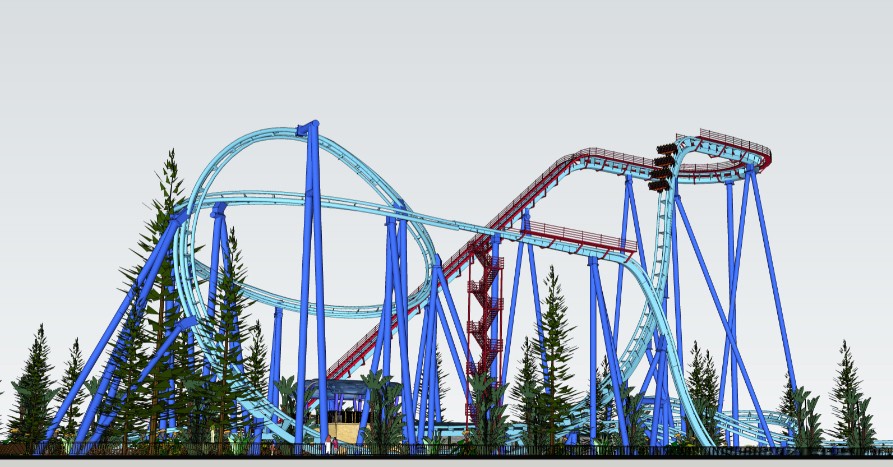 For roller coasters with a conventional angled lift, the amount of potential energy for the passenger train is acquired when the conveyer mechanism along the lift hill carries the train from ground zero to the top of the hill. We can say that the potential energy to acquire is somehow in proportion with the height it is worked up relative to the ground (or any other level).  The amount of energy stored in the passenger train is all that we need to keep a coaster rolling. The minute that the train lets go off the lift hill, the stored potential energy turns into moving energy. The faster it runs, the more moving energy it has, meaning the less potential energy it possesses. It’s about the conservation of energy.

During the ride, whenever the coaster climbs up a small hill or bumps up, its potential energy increases and moving energy decreases, meaning it slows down a little bit depending on how high the bumps are relative to the train level.

Bad news is eventually the train just slows down to a complete stop meaning its initially acquired potential energy is used up. Meanwhile it is parked so there is no moving energy in play. What’s wrong you may ask. Where is the conservation you have been bubbling all the way?  Blame it on friction and air resistance! Friction and air drag convert all that good potential energy into heat on the track and a momentary slow-down of the air flow blown on your face.

Chat Online
Chat Online
Chat Online inputting...
We are here to help you! If you close the chatbox, you will automatically receive a responsefrom us via email. Please be sure to leave yourcontact details so that we can better assist. Monday-Friday AM 8:00-PM17:00 (GMT+8)
Sign in with: